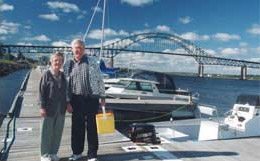 Retirement Miramichi Inc.: Creating a retirement living industry which enhances the economy of the Miramichi region.

Retirement Miramichi opened in 1997 as a private, non-profit corporation established specifically to enhance the economy of our region. Thus, 80% of our tenants are from away. Local residents (people living within 50 kilometres of Miramichi city limits) make up the remainder. Forty percent of the residents hail from Ontario, 40 per cent from Atlantic Canada, and the rest from across Canada, Ecuador, Australia, and the United Kingdom.

As Mike and Carol Frost found themselves moving toward retirement, Carol began to think about where they would live. Ottawa is her home town, and their children and grandchildren were there, but the hustle and bustle of city life had become something she and Mike did not want in retirement.

Carol saw a Retirement Miramichi advertisement on the Weather Nework and the idea of retiring to New Brunswick intrigued her to investigate further. When she ran the idea by Mike, she quickly found out she was on her own! “What!! There’s no way I’m retiring in Miramichi, New Brunswick!!” was his reply.

That was until he got here. Miramichi has been home to the Frosts for over ﬁve years, and they can’t imagine anywhere else they would rather be.

“The people got me ﬁrst,” says Mike. “They are so friendly and cheerful no matter where you are, the lifestyle is very laid-back, no rushing around for anything, and they just live and let live. It’s a neat little town. And,” he adds, “the cost of living is a fact of life for most retirees, us included. We can live here instead of merely surviving. It’s quiet and peaceful and it’s a place our grandchildren can be comfortable and free like kids should be, not like in the city.”

Small towns are boring? Not to the Frosts. Carol is a member of the Miramichi Quilt Guild, and Mike serves on the Hermitage Social Committee as well as volunteering at the hospital. They play darts on Sunday nights, bowl regularly, and take in the summer concerts on Waterford Green and Ritchie Wharf with friends from within and from around the community.

Their yard is a source of pride for them, a landscapers dream. It borders onto a grove of trees in the retirement community and they have added benches, a fountain and greenery. For the Frosts, Mike sums it up in one line: “This is as close to heaven as one is going to get for retirement.” 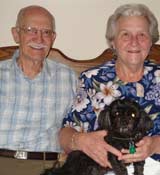 Bert and Helen Boyd were both born and raised in the Toronto area, but have been living outside Saint John, New Brunswick since 1961. When it was time to retire, they began to look for a new place because it was time to rest, and they were both very involved in volunteer activities. “It’s hard to give them up when you stay in the same area,” says Helen.

Bert saw the ad for Retirement Miramichi on TV and then they researched it on the internet. Neither of them knew anybody here and although they had been through Miramichi, they had no connections with the area. “We came here on a get-away weekend, not even telling our friends and family why we were going, or that we were even considering a move,” says Helen. “We spent the weekend in Miramichi and on Monday we picked out our house.”

“From the day that we were given a tour of the community and the meeting we had with the RMI staff, we have been very impressed with the quality of care and concern and professional way they treat the people who live here. The maintenance crew are so dedicated to making our home safe and comfortable, and the fact the lawn is mowed and the snow removed makes us feel like royalty,” she adds. “We are thrilled with the beauty of the area and the friendliness of all the people we have met. Shopping is so easy and within a short distance – we have the benefit of living in a quiet area away from the hustle and bustle of city life.”

Bert enjoys his garage, which has become his workshop where he can make all the noise and mess he wants without his wife complaining about mess in the house. Helen loves her garden and talks to them regularly so they know how much she loves them! During the winter, they bowl and swim at the Golden Hawk Centre, where they met a lot of people. They are very involved in their church and the friends they have made make them feel like they belong here.